The last week on our base in the Golan Heights was part aimless, and part full of the usual give 110%. We closed Shabbat on base, this is time for you to lay in your bed, and do nothing for as long as Shabbat lasts including a few hours before and about an hour after.

In the hours before Shabbat, someone goes on a food run in whatever nearby store there is, in search for junk food. People will write a list, give it to the person tasked with buying the list along with their money. And hopefully they will come back with what you wanted, or your money back.

Shabbat just isn’t the same without junk food and beverages.

In the hour after Shabbat, soldiers clean their rooms, shave their face and polish their boots. Like they should have done in the morning, but didn’t since its not obligatory to do that on base on Shabbat.

On Sunday, the entire company was sent to the field to zero our sights. In other words, to make sure the dot on our aiming device shoots straight. First we shot without our gear just to get the sight in working order. 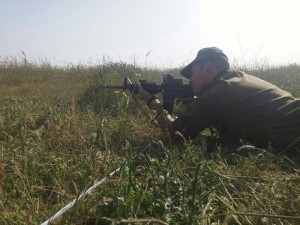 The heat of the day kicked in, and reached beyond the legal limit for non-operational military activity. So the timed 3km run, with full combat gear, was put off for a few hours. When the temperature dropped by a degree below the legal limit, we did the run.

It was hot. I remember drinking from the tube in my hydration pack that I clipped to my back while I was running.

After the 3km run, every soldier is to do what he did many many times in training, a yalam. This is a 200 meter sprint (in full combat gear) and then one is to shoot 6 bullets. Usually three in one fire stance and then three in another fire stance. If the soldier did not hit the target at least 4 out of the 6 times, he is to repeat the entire thing. Meaning another timed 3k run in full combat gear, and then another yalam.

Not everyone finished zeroing the sights on their guns that day. The bus that took us to the field in the morning was taking forever to pick us up again at night. It came to the point that a few of us started a fire while sitting around. This was the first time any of us were able to avoid the cold of the Golan Heights at night using the heat of a fire. Another lone soldier and I would go out looking for fire wood to keep fueling the fire, and this went on for at least four hours.

Most people joined our circle around the fire, and lazily relaxed submersed in the heat of the flames. When the flames began to die down, the circle would get tighter and closer to the flames. Then people would wonder where my buddy and I are so we could feed the fire some more.

Looking for sticks in well grown fields in the pitch of the night while surrounded by cows is not the easiest task. The friend I mentioned, also a lone soldier from America, loved doing it though. He enjoys the outdoors, and looked at feeding that fire as his own personal project. We walked over to where there were trees looking for fallen branches, he climbed to the tops of the trees and tried using his weight to knock branches off.

My entire thinking was, it was nice knowing this guy. Too bad he will probably fall straight through the branches and onto these large stones Israel is full of. I’m happy he didn’t fall, because it would have hurt to catch him. Eventually we found an olive orchard, and there were lots and lots of branches along our side of the fence (not the private side). So we just kept going back there, and bringing back with us gigantic branches.

My buddy would cut them up, stubbornly might I add. If we could have lifted a tree and brought it back, he would have found a way to cut it up.

We also used the fire to cook our dinner. Tuna fish in a can is nice enough, but put some toilet paper on it and burn it evenly so that the oil in the can feeds the flames in the can, and after a good long while, you’ve got yourself a smoked flavor tuna. If you did it right, you wont have bits of toilet paper in your tuna…but practice makes perfect.

Around 1 am, the bus finally came. We put out the fire and loaded the bus. My uniform, like my buddy’s was burned. Our faces were covered in ash, my uniform still has a few holes in it from the sparks that flew off the fire.

The next day we did briefings for our coming Kav (tour of duty). We did those all week, but that day was more full of briefings. I don’t remember one of the days of that week, but I remember the day after it.

This was actually fun for me, there is something very therapeutic about sitting down outside in the shade cleaning a gun. Your mind clears in the breeze, and you don’t have to think about what you’re doing.

Just clean till its not dirty anymore.

Here is the view I had while cleaning the guns: 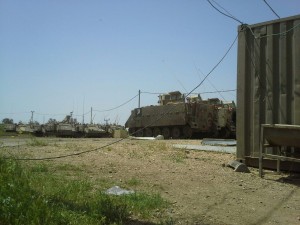 I enjoyed seeing how people were not sure what to do with the Mag, how to clean it, where. Lift it too? Since I’m a Magist, I gravitated toward cleaning the Mag. I cleaned three of them in about 15 minutes total.

Saw there were none left to clean, and moved on to clean the other guns.

We finished by lunch time with our part of the day, the afternoon was planned to be a relaxing trip to a place in the Golan where they have a nice presentation on the battles fought in the area during the 1973 Syrian invasion.

I’d already been there during my taglit trip to Israel. How interesting it seemed to me to go again, in my uniform and with my personal weapon. To take a picture in that familiar place. And this would happen after lunch time…

So there I stand, in the mess of people waiting to enter the cafeteria. I intentionally say “mess of people” instead of “line” because there are no lines in the army and maybe not even any lines in Israel.

Lines are for people that are at peace with the fact that they aren’t first, and will have to wait to get a chance to get what they want. Israelis don’t do lines. So instead of an orderly fashioned system by which people enter a door way, you have a mob of people with guns and nerves, pushing and shoving to get through a portal just a few feet wide. While at the same time, due to Israeli stubbornness, you have people who already ate trying to get out through the same said portal.

There is a back door, which I sometimes use to avoid the mass of stupid (from my perspective). But on this occasion I decided to go in the conventional way, and tough it out pushing and shoving. Then a siren went off about 50 ft behind us. This same loud speaker hanging from the wall was the siren on base for Holocaust Remembrance Day the day we came back from our last field week. And no doubt it was used on Yom Hazikaron (Memorial Day for Soldiers and Victims of Terrorism), and now it was making a noise I had yet to hear:

And military readiness is no joking matter.

The entire time that we have been doing military exercises in the Golan Heights, we have had to be on alert readiness to be completely geared up and ready within 30 minutes of being called up. This means, regardless of where we are, or what we are doing, even if its in the middle of a field week, after 30 minutes every piece of gear is ready for action, is loaded on a bus, and every soldier as well. And the wheels of the bus are moving.

This is what we did.

The same buddy I mentioned earlier in this post was coming back from kitchen duty, having no clue whats going on, other than my summary to him “they could be calling us up”. To which he said:

“Wouldn’t it be funny if we go to war now, close to the end of our service?” His meaning was there goes being released…
Most likely we would both extend our service in that situation.

In the end we didn’t go to war.

Instead, we just couldn’t relax. Our field trip was reinstated, but we went with full battle gear and all our weapons of war crowded and crunched in the bus seats and aisles with us.

The Sword of Damocles dangling over our heads as we watched the presentation.

I couldn’t help it but to think about the Syrian tanks, and transport carriers I’d seen in the Golan Heights during our field weeks. Soviet models of a bygone time. They are in the most serene places, beautiful grassy, hilly areas full of big strong trees. They are left often without even a sign or plaque explaining their purpose here.

Those were field weeks, I couldn’t take pictures of them nor could I even stop as we were constantly maneuvering.This presentation brought those old, rusty, ghost looking pieces of armor back to life in my mind. And they weren’t friendly.

Neither were those mortars.

And there I sat, in a place where I’d sat as a tourist, but in my combat gear. Awkwardly, uncomfortably, defiantly.

I didn’t feel like a tourist, for better or worse, I became part of this country.