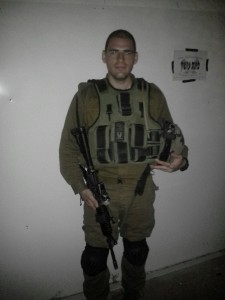 After my final arrest mission, I did a week or so of other missions. We caught two Palestinians with an M16:

Tried to trick us with a ton of goods in the back, “just did some shopping, nothing to see here…” 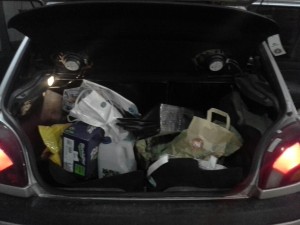 And here is the weapon, with a magazine: 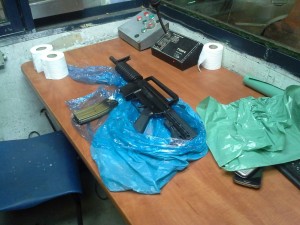 Finally word came through to my Platoon Commander that my military vacation was to begin the next day. That evening I gave out items to guys in my unit and in the morning returned all my combat gear.

At that point, I was free to go back home to Ranaana for a military vacation until my release date from the army. Most of that time I spent sleeping but all of that time I enjoyed freedom and life again.

It seems crazy but the time is up. I signed up for 18 months of active duty, and on June 10 2015 I was honorably discharged from active duty service. However, reserve duty is always there, and I intend to keep myself in shape and conditioned for operational status in the combat reserves regardless of where I am in the world when/if trouble arises.

Other than that, the next phase of my life begins. Despite the annoyances, the hardships, the pure slavery of being a soldier and especially a combat soldier, the Israel Defense Force is probably the most meaningful organization one could be a part of. Even the most boring moments like standing around at night on a hill with nothing to do other than stare into darkness, and listen to the wind or one’s own breathing, one is still acutely aware of the importance of one’s job. Next to you is a town or city, or key road people travel, and you make it safe with your presence.

Its quite a meaningful job when the lightest side of the job is still so meaningful.
And what is life without meaning? So, I hope to go on to do still more meaningful things, because after defending a country and its people, very little can compare with that level of satisfaction in one’s job.

Hopefully, I can find a way to find meaning with a law degree, because that’s my next goal.

The day I had to come back to our unit’s command base, and return everything I had left was nerve racking. Mainly because I was afraid I’d have to give back something I cherish, really Its crazy what the army expects a combat soldier to give up.

On our last day, they want us to return our Beret. The thing we go through so much training to receive, and in the end march anywhere from 60-90km to gain (the Kfir Brigade has the longest Beret marches in the infantry).

They want us to return all of our uniforms.

They might as well ask us to leave them one of our testicles.

The Beret I returned was not mine, I found it in the lost and found of a central bus station in Tel Aviv.
So, everything that is important to me, I kept.

I write this after having packed all my things, and am now waiting to leave for Ben Gurion International Airport.

Thanks for following my journey, I’ll still answer any questions or respond to any comments.

I take with me not just my sentimentally valuable items, but also my own new found appreciation for FREEDOM.

And of course, an unforgettable time as a soldier of the Lavi Battalion and of the Nahshon Battalion:

The drive to start my Hofshash: admiring the country side of Judea/Samaria for the last time, until the next time, a long time from now: